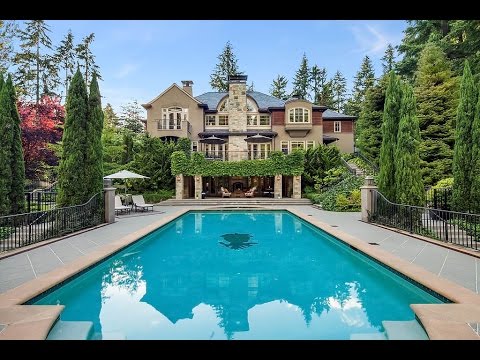 For more information go to http://s.sir.com/2aJUZWY

This resort-love estate elegantly unfolds before your eyes as you drive down the street bordered by 100-foot tall Lombardy poplar trees, affectionately called Poplar Lane. You are warmly welcomed by a serpentine driveway leading uphill to a hidden formal entry and motor court, the house nestled into the hillside. Designed and built by a distinguished team of designers and contractors, this property is the masterpiece of two years of careful planning, and uncompromising vision. Seattle Landscape Architect, Brooks Kolb, began the project by working closely with renowned architect, Brandt Hollinger to locate a brand new home on a rare 3-acre site in the heart of Bellevue, Washington. His design retained the native feel of the site, preserving the dense tree cover of Douglas Fir, Vine Maple and Western Red Cedars. He also laid the foundation to perfectly orient the house, doors, windows, and the pool and tennis court to seamlessly maximize the sun exposure. With a goal towards a year-round bloom, he hand picked all of the plants and vegetation and strategically placed them throughout the 3-acre site creating a private, fun, resort-love feel with lots of gathering places. Hollinger, together with Doug Rasar Interiors, understood the owner’s desire for a warm, welcoming, and relaxed feel, and created a home that exudes the essence of Ohana – the Hawaiian word for family. His design was inspired from his long-standing admiration of two English architects from the very early 20th century, both notable for their designs of country and manor houses. He used characteristics such as steep but hovering slate-clad hip roofs set atop fairly severe stucco and masonry walls, usually with big continuous groupings of windows, bays and bow windows and prominent chimneys. In addition, he incorporated the use of ornamentation and exuberant moldings and trims, both inside and out, that helped enrich the design, and also served to give the overall structure a scale that the owner could relate to and live comfortably in. He also used hidden elements such as a private front entry shielded from public view and only visible to visitors to the property, and a four-car parking garage that is concealed from the main facade of the house. The organization of the house was based on the clustering of adult/ more formal uses in one wing, and children/more utilitarian uses in the other. He decided to connect them with a hub consisting of a two-story grand entry and family activity spaces- big bold spaces that expressed the largeness of the house. This also gave him the opportunity to draw sunlight into the center of the house all throughout the day.