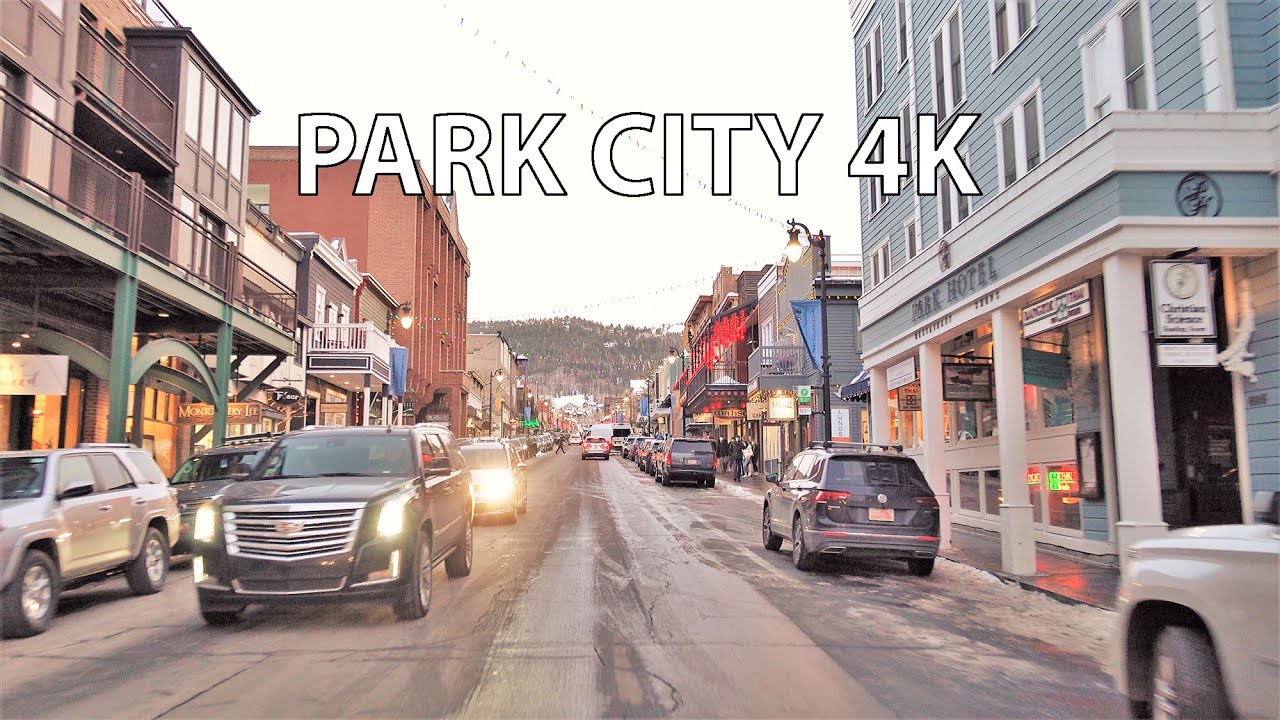 Evening road trip from downtown Salt Lake City Utah to Park City Utah, the mountain ski resort town most famous for the Sundance Film Festival, the largest independent film festival in the United States. Typically the festival is a huge draw, with over 120,000 people coming to the Salt Lake City area, but the event is currently being held virtually. The ski resorts here also form largest ski area in the U.S. In all, the resort boasts 17 slopes, 14 bowls, 300 trails and 22 miles of lifts.
Route: https://goo.gl/maps/7vX5x2sceSEiW8ny6 .
Park City lies east of Salt Lake City in the western state of Utah. Framed by the craggy Wasatch Range, it’s bordered by the Deer Valley Resort and the huge Park City Mountain Resort, both known for their ski slopes. Utah Olympic Park, to the north, hosted the 2002 Winter Olympics and is now predominantly a training facility. In town, Main Street is lined with buildings built during a 19th-century silver mining boom.

After a population decline following the shutdown of the area’s mining industry, the city rebounded during the 1980s and 1990s through an expansion of its tourism business. The city currently brings in a yearly average of $529.8 million to the Utah Economy as a tourist hot spot, $80 million of which is attributed to the Sundance Film Festival. The city has two major ski resorts: Deer Valley Resort and Park City Mountain Resort. Both ski resorts were the major locations for ski and snowboarding events at the 2002 Winter Olympics. Although they receive less snow and have a shorter ski season than do their counterparts in Salt Lake County, such as Snowbird resort, they are much easier to access.

In 2015, Park City Ski Resort and Canyons resorts merged, creating the largest ski area in the U.S. In all, the resort boasts 17 slopes, 14 bowls, 300 trails and 22 miles of lifts.

The city is the main location of the United States’ largest independent film festival, the Sundance Film Festival, home of the United States Ski Team, training center for members of the Australian Freestyle Ski Team, the largest collection of factory outlet stores in northern Utah, the 2002 Olympic bobsled/skeleton/luge track at the Utah Olympic Park, and golf courses. Some scenes from the 1994 film Dumb and Dumber were shot in the city. Outdoor-oriented businesses such as backcountry.com, Rossignol USA, and Skullcandy have their headquarters in Park City. The city has many retailers, clubs, bars, and restaurants, and has nearby reservoirs, hot springs, forests, and hiking and biking trails.